Will you go to Hell if you call someone a “fool”?

The above quote is attributed to Yeshua and translated by King James translators (Matthew 5:22).

Over the years I have had a number of people ask if they would really go to Hell just for calling someone “a fool.” Most questions like this come from people who belonged to churches that teach their members the doctrine of inerrancy and infallibility of the Bible. Obviously, if a person’s church teaches that doctrine and if their Bible contains the above words, what else could they believe – if every word of the Bible is to be taken literally and if the Bible says if someone calls someone else a “fool” they will go to Hell, then it must be the divine truth!

Keep in mind that those same churches teach that their eternal salvation is based on “correct beliefs.” Obviously, questioning anything their church teaches would not be welcomed by those in authority and usually it is not tolerated. Before I get back in the box and address what Yeshua actually taught, I want to make sure you understand the following facts:

(1) Yeshua did not write down his teachings.

(2) None of the original manuscripts of any of the books in any Bible exist.

(3) Yeshua did not create a New Testament.

(4) Yeshua did not teach in English (King James or American).

(5) The King James Bible was created over 1,500 years after Yeshua taught.

(6) Yeshua did not create or teach the doctrine of inerrancy and infallibility.

(7) Yeshua did not teach that one’s salvation is based on beliefs.

Now let’s get back in the box and consider what Yeshua actually meant when he spoke the above words. Always remember the #1 BHC Linguistic Guideline – “KEEP THINGS IN CONTEXT!” The context of the quote from Yeshua was a lesson on how to deal with anger so that it will not lead to an act of murder like the murder of Abel by Cain. He had given two previous warning signs to be used as “anger-control” measures. This is the third warning sign:

“And anyone who says, ‘You fool!’ will be in danger of the fire of Valley of Hinnom.” 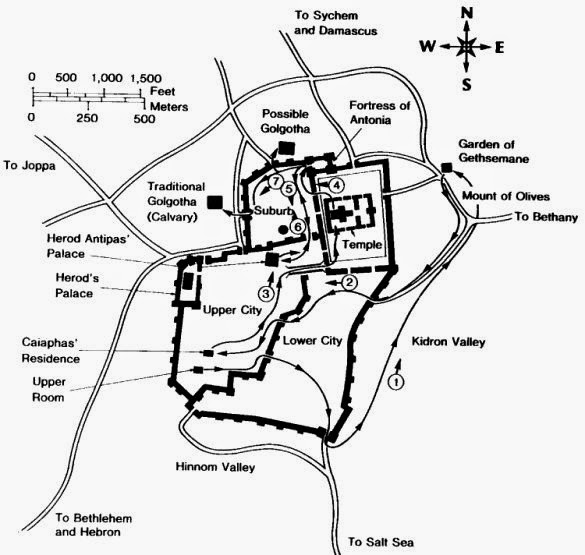 A popular teaching in evangelical circles is that the Hinnom Valley was a perpetually burning trash dump, but there doesn’t appear to be any evidence from the time of Yeshua to support that idea. The Jewish audience of Yeshua would have been familiar to the words of Jeremiah and Isaiah that were linked to the valley.

Indeed! Topheth has been ready for the king for a long time now. His funeral pyre is deep and wide, with plenty of fire and wood. The breath of the Lord, like a torrent of brimstone, kindles it. (Isaiah 30:33)

And they shall go out and look on the dead bodies of the men who have rebelled against me. For their worm shall not die, their fire shall not be quenched, and they shall be an abhorrence to all flesh. (Isaiah 66:24)

For the original Jewish audience of Yeshua, they would have under the words “in danger of the fire of Valley of Hinnom” to mean “in danger of being judged by God” – the ultimate and final judge.

They would have also understood that when Yeshua used the term “fool,” he was referring to Psalm 14:1-3:

ELOHIYM is the word used for “the Creator” in Genesis 1:1-2:4a. The Creator measured all of His works with a standard to see they were TOV – acts that preserved life, protected life, made life more functional and increased the quality of life. This is what we call the “TOV Standard.” A point Yeshua makes here is -- the Creator will use the same standard to judge mankind on the Great Day of Judgment – that is Yeshua’s salvation message.

When people get angry they often attempt to hurt the person they are angry with through words before they resort to using physical force. Yeshua had already given his audience two warning signs so his followers would be aware of elevations in the intensity of their anger. They were getting closer to the point where they were in danger of acting like Cain. This is Yeshua’s final warning sign:

This lesson is just as relevant for 21st century Americans as it was for 1st century Jews. I hope you found this blog of value.

PS – If you found this information useful, please let me know:

(2) Send this to others who care about Yeshua and want to do what He taught.

(4) Help us be able to do more by donating to our work by CLICKING HERE. Consider become a regular monthly contributor -- just check the “reoccurring box” at PayPal.

Popular posts from this blog

September 09, 2013
In the last blog, we covered the first part of Yeshua’s lesson on Anger -- An Angry Person Should be Tried in Court like a Murderer – keep in mind that “anger” is the focus of Yeshua’s lesson. “Whoever says to a brother, ‘ RAKA ,’ shall be answerable to the Sanhedrin.” [i] Yeshua reveals that the seriousness of the offense has become greater by elevating the crime to the next highest court – the Sanhedrin . It is the highest court in the nation and would be the equivalent of our Supreme Court. What makes this offense more serious than murder, to keep things in the context established by Yeshua? It is because of what the angry person said out of anger – “ RAKA !” RAKA is the English transliteration of the Greek word found in the ancient manuscripts of Matthew. Interestingly, the Greek word is also a transliteration of a Hebrew word into Greek. Keep in mind that when a translator working on a translation of a Greek manuscript transliterates a Greek word, he only finds the
Post a Comment
Read more

February 28, 2015
One of Jesus’s earliest memories was no doubt watching and listening to his family when they gathered to pray the Shema at sunrise before the day’s work began and after the working work day was over at sunset . He also heard and participated in praying the Shema at their synagogue. He was surrounded by neighbors who also prayed the same prayer in their homes every day. The Hebrew word for prayer is tefilah . It is derived from the root Pe-Lamed-Lamed and the word l'hitpalel, meaning “ to judge oneself .” This surprising word origin provides insight into the purpose of Jewish prayer. The most important part of any Jewish prayer, whether it be a prayer of petition, of thanksgiving, of praise of God, or of confession, is the introspection it provides, the moment that we spend looking inside ourselves, seeing our role in the universe and our relationship to God. [1] Most of Jewish prayers are expressed in the first person plural, "us" instead of "me," an
Post a Comment
Read more

August 28, 2013
For verily I say unto you, Till heaven and earth pass, one yod or one tittle shall in no wise pass from the law, till all be fulfilled. (Matthew 5:18) In the last blog we learned that a “jot” was really “ yod ,” the smallest letter of the Hebrew alphabet. So, now let’s turn our attention to “ tittle ” and see what it means. It is another one of those words you never hear or use in everyday conversations. First, let’s see look up tittle in an English dictionary and see if we can find a definition. There is a definition and it is: “a dot or other small mark in writing or printing, used as a diacritic, punctuation, etc.” However, when we look at a yod we do not find any dots or small marks.  Follow the arrow and look at the very upper left tip of the  yod . ↓  י   Do you see the small  point? When we turn to the Jewish culture of Yeshua we find that the scribes had a name for it --  קוץ  ( QOTz ). The translation of the word  קוץ  is “thorn.” [i]  When Yeshua spok
Post a Comment
Read more